KidNano said:
looks good Jesse. It's amazing how different the color is between the first two pics. Are you not worried about that byssal anymore? I'm excited to see him when he's all happy and fully extended.
Click to expand...

Thanks Cris. No, I'm not too worried about it anymore. He seems to be holding it closed now. In case anyone is curious, this is what Cris is talking about...

When I brought the clam home, I obviously acclimated him and then, when moving him to the tank, I noticed this opening...

I have had a few clams in the past and never remember seeing anything like that. I grew concerned and posted in a few clam forums and the overwhelming response was that it was a normal reaction to stress. I guess the clam controls that flap of tissue on the byssal opening and when stressed the opening can get larger like that. Anyways, all seems well now.

I had that happen to one of mine once when I moved it. I thought I cut all the fibers but apparently I didn't. I was nervous as all get out as I thought I had basically killed my clam. Thankfully it pulled through.


FYI, I was informed that crocea and maxima clams are rock dwellers. When I moved my clams to the rock I had MUCH greater mantle extension. Just a bit of flat rock underneath the clam is enough. Gives it something to latch onto and protect that opening in the first shot.

TimSchmidt said:
FYI, I was informed that crocea and maxima clams are rock dwellers. When I moved my clams to the rock I had MUCH greater mantle extension. Just a bit of flat rock underneath the clam is enough. Gives it something to latch onto and protect that opening in the first shot.
Click to expand...

Tim, I only have him on the sand so that he can attach to a frag disk that he is sitting on. Once he attaches I will be moving him up to a spot that I already have picked out.

KidNano said:
looks good Jesse. It's amazing how different the color is between the first two pics. Are you not worried about that byssal anymore? I'm excited to see him when he's all happy and fully extended.
Click to expand...

Yeah clams are way prettier from above. I would love to have a big shallow zero edge cube tank designed to be looked at from above full of clams and a coupe of mature SPS colonies. :loveface

Anyways, back to reality... he was extending a bit more today.

Here is the shot from the 16th and from yesterday side-by-side...

He looks great. Next weekend is going to be tricky. I might be putting an attic fan in my father-n-laws attic on saturday. Then Sunday I think we're going to meet up with my pops for a fall dinner or something. Saturday evening will probably work for me if it does you.

by the way my frogspawn is recovering from what ever I did to make it angry. I'm thinking it was getting too much light where I had it. moved it back to the corner and they're extending again. I found two heads we can cut off for you as well if you want them.

Let me know about Saturday.
R

:shock: So I'm four polyps closer to getting a piece of that huh?
R

KidNano said:
:shock: So I'm four polyps closer to getting a piece of that huh?
Click to expand...

Cris, you called me out when I was at your house... the comment about how you can tell there is something wrong with someone's tank if they haven't posted a FTS in a while? LOL, well obviously I hadn't so here goes...

I had, *HAD*, one rock that was sprouting all sorts of macroalgaes and was really becoming a nuisance. Its the rock in the upper right of the tank...

So I bought a new piece of LR a few days ago, put it in a bucket with a power head and a heater, and tested the water for nitrates, nitrites and ammonia. There was never any measurable amounts of any of the 3 (no surprise as the rock was pretty clean and had no odor whatsoever even at the tank at the LFS). So tonight I put took out the problem rock along with breaking off a few small sections of other rocks that the macro had spread to and put in the new piece. Here are the "after" shots. Unfortunately (and obviously) everything was closed up but you can at least see the new aquascaping. I was able to get many of my "high-end" palys up off of the sand bed. I wasn't able to put anything on the old rock without fearing that the macros would overgrow them. 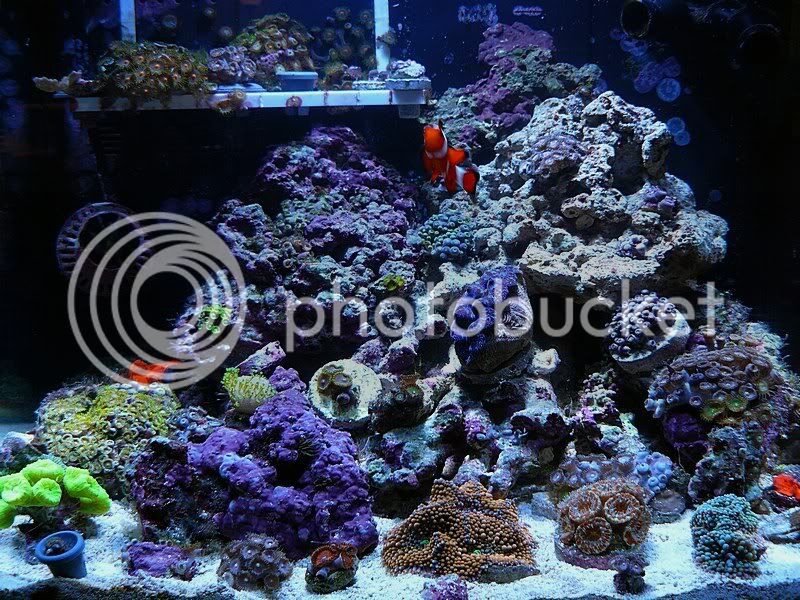 And here are a couple of shots of some new pieces that Cris gave me. There are more but I forgot to take pics of some of them.

The zoas on the left are from Cris and are a frag off of the monster zoa colony from his tank. Cris, did you say that this is likely the original frag that formed your colony?

And here are a couple just because! 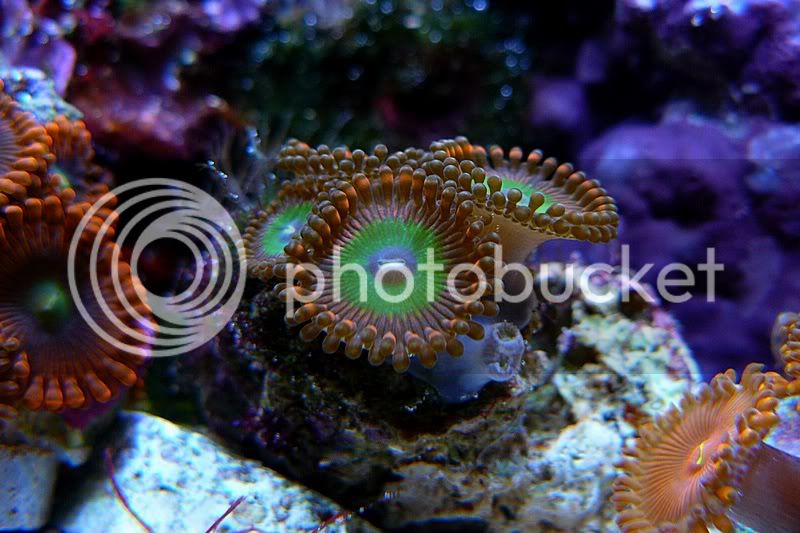 Let me know what you think of the new rockwork! :thanks

looks great jesse. Wheres that awesome elephant ear? Yeah that is one of the original frags from that rock. there were 6 or so. Gotta go bath with the kid.

Tough. Nothing to say about the rock work though. I don't like my own rock work. I tend to move it around too much.
L

Come on lets get it loaded with stuff! Can't wait to see the progression! Hope Halloween was cool.
R 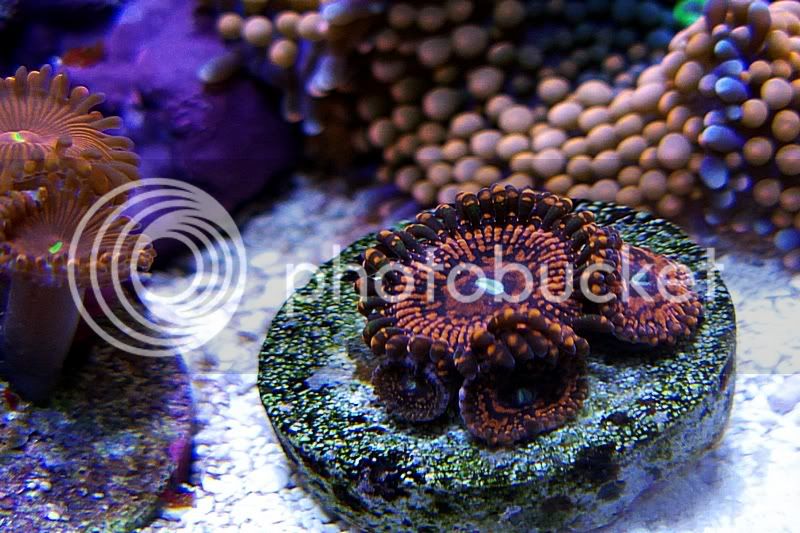 That's awesome. Do you want my tank?
F

I think I just chocked out of amazement...add me to the list for frags!

Jeez! I am going to have to move soon so I think I will take the chance to move everything to a 20 gallon long with the MH over that.
K

TimSchmidt said:
Jeez! I am going to have to move soon so I think I will take the chance to move everything to a 20 gallon long with the MH over that.
Click to expand...

That's a bummer. I just moved too. shut my tank down and traded everything for a puppy. keeps the wife off my back because she wasn't thrilled with the move. Good luck to you.
K

When are you going to post an updated shot of your tank?
M

Hey reefman23 I just wanna say NICE TANK! I'm a newbie and me and my girlfriend just got tanks. She just got the 28g nano cube and I'm taking her biocube 14. We really want to get a variety of zoas, ricordea, and anenomes. I want to know where you get your frags? Also what is your favorite LFS? Any advice will help too =] THANKS!
You must log in or register to reply here.
Share:
Facebook Twitter Reddit Pinterest Tumblr WhatsApp Email Link
Top